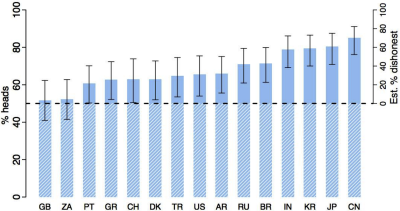 Are there cultural norms for telling the truth? Recent research by David Hugh-Jones suggests that this may be the case. In his coin flip experiment, respondents were asked to get a coin ready. On the next screen, they were asked to flip the coin and report the result. They were also informed that they would receive an incentive (either $3 or $5) if they reported “heads.” As such, respondents who flipped “tails” had to choose between telling the truth and receiving the money. This experiment allows honesty to be estimated at an aggregate level, by comparing the proportion reporting heads in any group to the 50% proportion expected. The figure above shows how the results for honest reporting differed by country. You may be able to repeat a version of this in your class. You may note that another coin flip exercise is recommended in the toolbox to explore luck and entrepreneurial success. You might run this in an earlier class with no incentive and record the proportion of people that report heads on each round. Then, in a class on ethics (or global strategy), repeat the exercise with an incentive ($20 should be enough). See if the proportions of heads reported differ. It may be that the class setting affords enough monitoring that cheating is not observed. Also, a large sample (100 or so per group) would generally be required to find significant differences in honesty. Even so, you can still present the results of the study (and, perhaps, argue that your class is more honest than average subjects in their country). You could also try to duplicate the lack of monitoring in the experiment by having students flip a coin at home or online and report the result. As such, there might be reasons to have students do this exercise outside of class and discuss the results in class.