Here is a mini-case ripped from the headlines. As the article states, “As much as JAL has focused on slashing costs 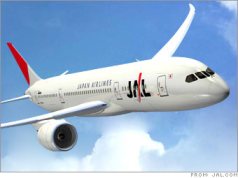 , it has also sought to close the service gap with local rival All Nippon Airways – putting in new seats, revamping in-flight menus and installing electronic toilet seats in some business and first class cabins. That investment underscores JAL’s belief that customers will pay a premium for full-service flights.” You can also find a companion video from CNN here. This is great for an introductory class. Allows discussing all parts of a strategic audit including strategy, performance, resources, and competitive position. Also the right size to introduce case discussion for a group that has never done case analysis and discussion before. So how did Kazuo Inamori help change the culture at JAL: ‘nommunication’. “That is when he unleashed another secret weapon. I brought six cans of beer after these sessions or to people who were working late,” he says. After a beer or two, people opened up and told me their honest opinions.” (see the follow up story and video here)