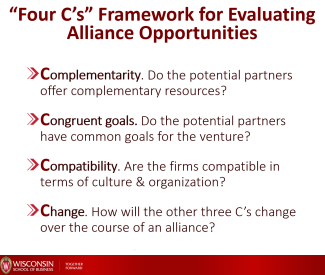 Strategic Alliances don’t make the news the way M&A do so some may struggle for examples. It is especially helpful to make students aware that, while Alliances may be less risky than M&A, there are still risks that need to be analyzed. Tom Petty provided a useful example to apply the “Four C” alliance framework. Like many musicians, he signed a contract with a record label before he made it. He and ABC had Complementary capabilities needed to develop and promote hits. Initially, they had Congruent Goals in that their interests were aligned to make the band a hit. Organizationally, they were Compatible in that they were able to coordinate effectively. What Petty failed to anticipate was how things would Change over the course of their agreement. By their 3rd album, he felt that the arrangement was so unfair that he tried to back out of the agreement claiming that ABC had no right to sell the contract to MCA. Ultimately, he only got out of it by declaring bankruptcy. The song, Refugee captures the anger he felt over how he was treated by the record companies and offers a nice lead in to the discussion. This also brings out a discussion of bargaining power and how it may change over time.